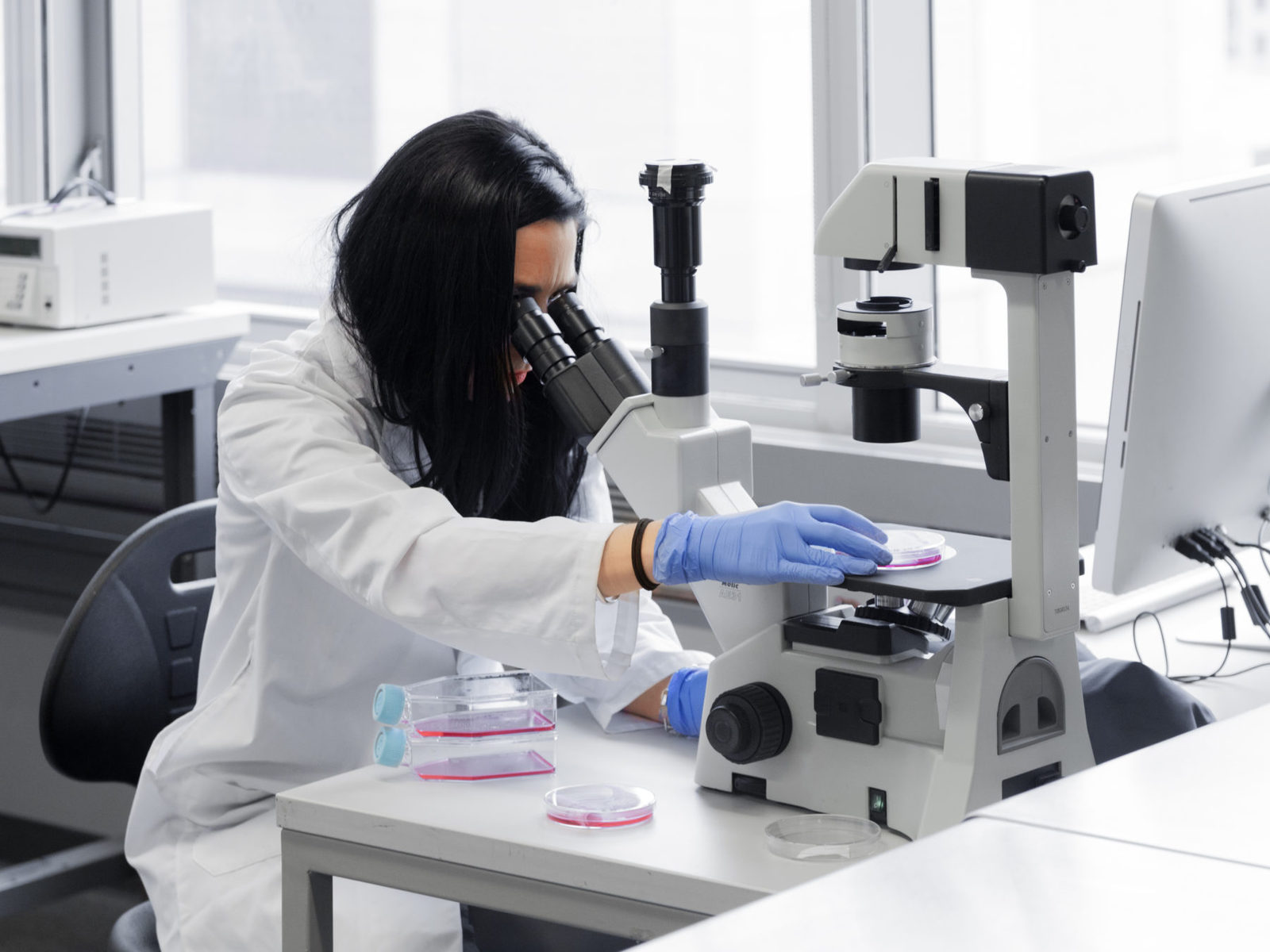 “Witch Doctor” says WhiteFeather Hunter, laughing. Once she receives her PhD in BioArt, she says jokingly, she will be able to refer to herself as a true Witch Doctor. When you read the list of projects she’s been involved in, it might make sense: growing mouse matter on her own hair as looms, knitting bones and researching fermenting lichen with her own urine. According to Wikipedia:

“BioArt is an art practice where humans work with live tissues, bacteria, living organisms and life processes. Using scientific processes such as biotechnology (including technologies such as genetic engineering, tissue culture, and cloning) the artworks are produced in laboratories, galleries, and artists’ studios.”

From her studies in Textiles at NBCCD, to a Masters in Fibre Arts, and now a job as Principal Investigator at The Speculative Life Lab,  and coordinator at the Textiles and Materiality Research Custer, both at the Milieux Institute for Arts, Culture and Techology at Concordia University in Montreal, WhiteFeather has always loved textiles, mythology and historical textile techniques as well as the new intersection of BioArt.

Although she completed her first year at NBCCD, WhiteFeather then took off to do some travelling. It wasn’t until 3 years later, when a Textiles student snuck her into the studio at night and sat her down to show her how to put her first warp on a loom, that WhiteFeather became hooked.

The schedule at NBCCD was very flexible to her life at a single mom, and WhiteFeather thrived. She was able to care for her son, graduate from NBCCD, and get hired as an instructor to teach and to pursue her BAA through the Articulation Agreement between the University of New Brunswick (UNB) and NBCCD.

WhiteFeather’s textile work has always involved organic materials, a keen interest in historical techniques and traditions, and which she is now combining with bioscience; artists and scientists collaborating to benefit both art and technology.

WhiteFeather’s poppets, created for the very first exhibition at the NBCCD George Fry gallery were hand made dolls incorporating textiles, bones, feathers and other organic matter, and were themselves referencing voodoo, mythology and sometimes “witch” or shamanic practices. So it’s no wonder she ended up studying under Andrew Pelling at Pelling Lab in Ottawa, who deeply and profoundly influenced her pursuit of technological training in the lab. This workshop training began an interest in growing mammalian tissue on textiles and a keen interest in crafting tissue engineering, with an emphasis on textiles and bio systems working together. In a residency in Australia, WhiteFeather worked on knitting bones in the laboratory. She has also used her own hair as a traditional loom and grew mouse tissue on it. Of course she says this is raising the question of “what is it now?”…it’s not human, and not strictly mouse any longer, and what can it become? She has tried to work with bone cancer because it grows fast, but cancer is not co-operative.

A recent trip to Iceland saw WhiteFeather using landscape as laboratory, and doing a lot of lichen scraping. She is currently researching the use of her own bodily fluids (specifically urine) on lichen to obtain traditional textile dyes. This relates to another residency she will be attending in Finland, where fermented urine is used to dye lichen, in a traditional indigenous natural dye technique. WhiteFeather is hoping to merge new technologies into this ancient process, and will have a show that will undoubtedly feature lichen in jars of urine in the process of fermentation, recipes for dyes and extraction. She will also have yarns dyed through these processes and probably have a Jacquard weaving using these yarns.

Recently WhiteFeather has learned she is directly related to Icelandic people through genome mapping which has fueled an interest in genomic data – specifically using chromosomes from her own DNA. She will weave her DNA’s own pattern into a woven textile that will incorporate dried organic materials she collected in Iceland.

WhiteFeather is going to be working with a group in Montreal that will be growing and tanning Kombucha scoby into leather. Early February, she was invited to go to the Transmediale Festival in Berlin, currently considered to be the art capital of Europe. She will be part of a research group going to visit the Natural History Museum, to film document and problem solve what to do with their incredible collection from around the world. This thoughtful use of artists as problem solvers and creative thinkers is one of the outcomes educators strive to instill when students study the arts.

Larger urban centers are more likely to have the resources to fund organic materials as art. This is one of the reasons WhiteFeather is working at Concordia University in Montreal.  She is a coordinator in the Textiles and Materiality Research Cluster, part of Speculative Life Laboratory on campus. WhiteFeather is deeply interested in this new area of artists and scientists collaborating on innovative ways to approach biotechnologies, and to use biological transformation processes. WhiteFeather is also a teacher, which she loves above all else.

WhiteFeather is planning on completing a Science PhD in BioArt someday. Although it sounds rather sci-fi here, she says Europe has been on the cutting edge of this new area for 10 years. The Netherlands, Australia and even the UK have well accepted and established bio art cultures.

WhiteFeather’s time at NBCCD was extremely valuable and the solid basis for all her current endeavours. In spite of all the places she has studied and visited, she says the foundation in technical skills at NBCCD was invaluable and of the highest calibre. It’s great to desire and strive to be conceptual, she says, but it’s not as possible to attain without an extremely technical skills foundation. She says she will always cherish the time spent at NBCCD. 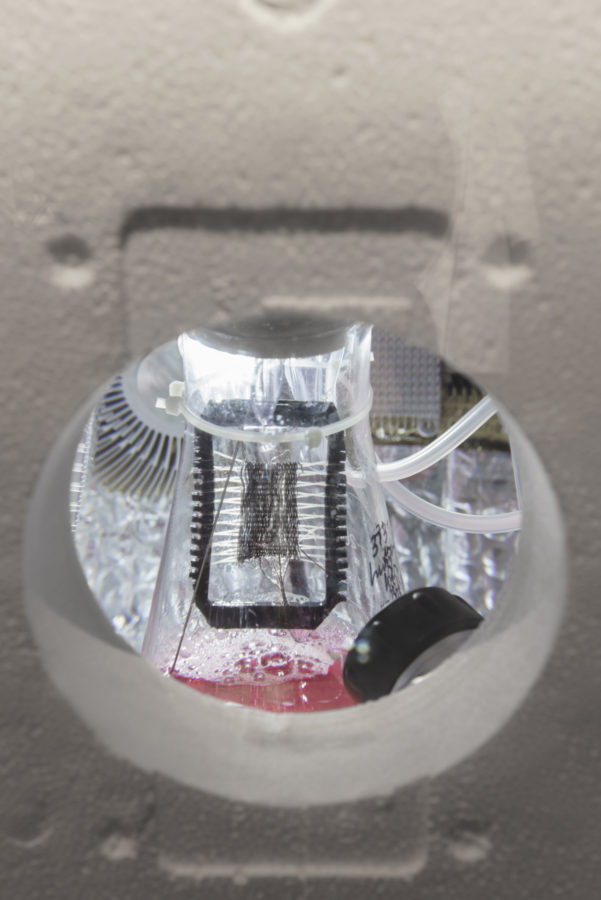 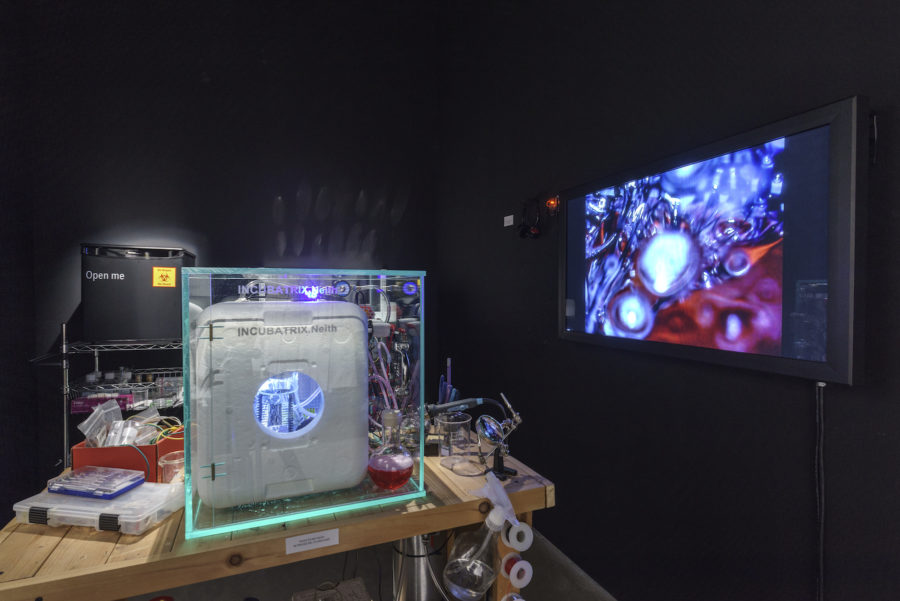